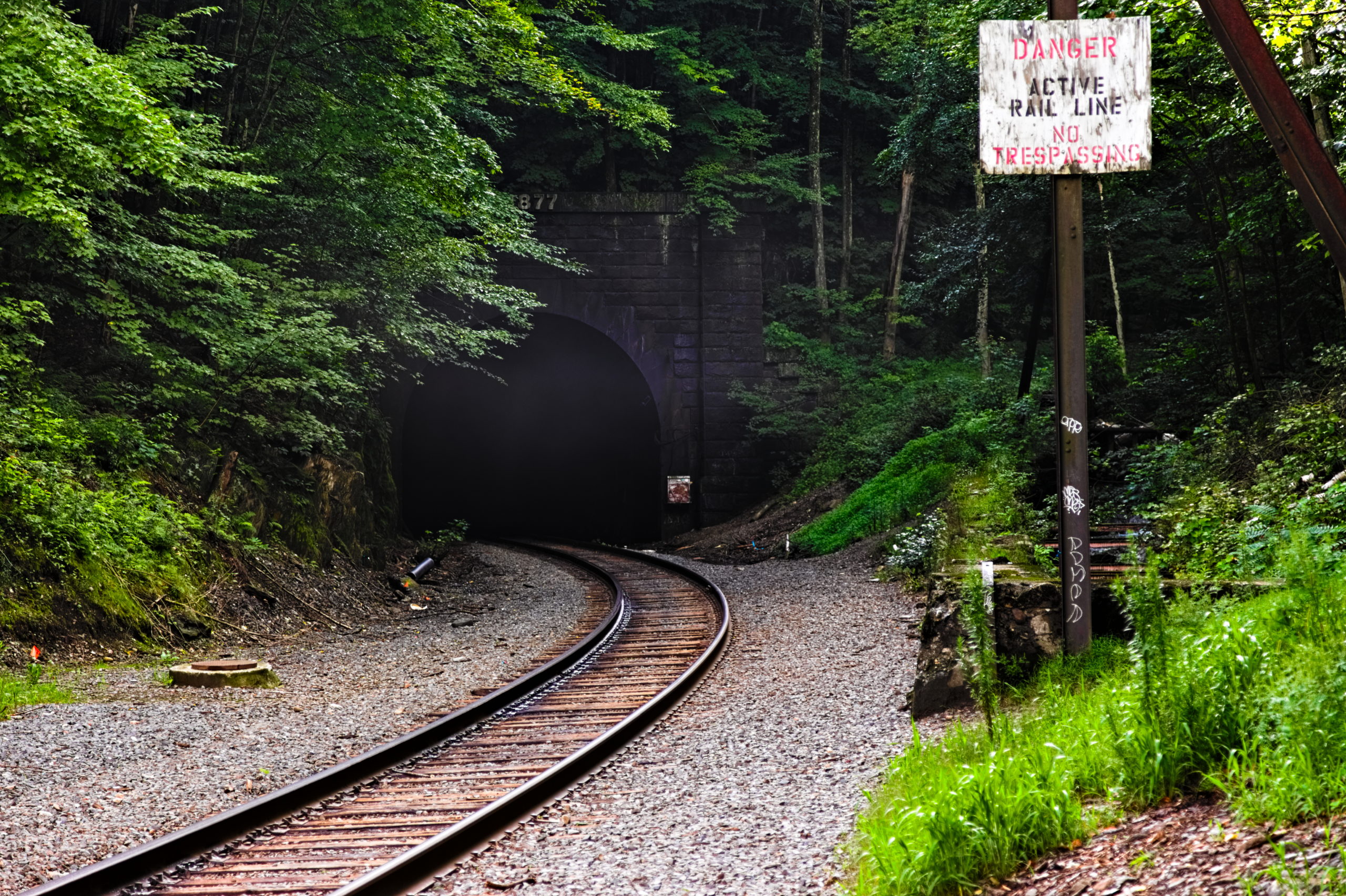 The Hoosac Tunnel, known by many as The Bloody Pit, stretches nearly five miles under Hoosac Mountain in the Berkshire Hills of Western Massachusetts. Taking over 22 years to construct, and costing numerous lives, the tunnel connects North Adams to the town of Florida, and functions primarily as a freight line. Unfortunately, trains are not all that pass through this dark subterranean passage. Daredevils and employees brave enough to traverse the tunnel at night report the sounds of moans and screams. Two unfortunate men encountered the glowing, headless apparition of a miner carrying a lantern.

History of the Tunnel

The original project, proposed in 1819, was part of a canal system that would connect Boston, Massachusetts with Albany, New York. However, the project turned out to be too costly and complicated. Instead, Alvah Crocker, a wealthy proprietor and legislator in Massachusetts, devised a new plan to expand the Southern railways into the Northern towns, and to his paper mills.

On January 8, 1851, the Troy and Greenfield railroad broke ground on the massive tunnel that cut through 4 3/4 miles of the Hoosac Mountain. Hundreds of miners toiled in hazardous conditions with drills, shovels, picks and explosives. Before the tunnel’s completion in 1873, 195 men lost their lives to fires, explosions, and falling debris. In 1874, an elevator accident claimed the life of 14-year-old Orrin Wilson, who was on the site to visit his father. Orrin’s father would continue his work in the tunnel until 1878 when an explosion would also claim his life.

The worst tragedy in the dig’s history took place on October 17, 1868. Thirteen miners descended into the Central Shaft to begin the day’s work. On the surface, an explosion of naphtha gas tore the Central Shaft’s pumping station to pieces. With the pump demolished, the tunnel below filled rapidly with water and dangerous fumes. Rescue crews scrambled to put out the flames on the surface. Once the turmoil on the surface was under control, a single miner descended into the shaft to search for survivors. Less than halfway into his descent, the miner encountered toxic fumes and returned quickly to the surface. Though nearly suffocated, he reported that there was “No hope.”

Unfortunately, he was wrong. Many of the miners were, in fact, still alive. They survived long enough to construct a raft they had hoped to ride to the surface with the rising water levels. Unfortunately, as the water reached the surface, it brought with it only some of the miner’s bodies. It would be a full year before the raft and remaining bodies were located. During that year, the work in the Central Shaft ceased. However, people passing by “the bloody pit” reported hearing screams and seeing figures of the dead miners disappearing into the mountain mists. These reports ceased after the remaining miners were laid to rest.

The drilling and the blasting would continue for nearly two decades, chipping away at the underbelly of the mountain, as well as claiming many more lives. On November 28, 1873, crews drove the final spike into the tracks.

Over the next century, the railroad would continue to change hands. The Hoosac Tunnel also saw numerous modifications, such as the addition of electricity in 1910, and diesel exhaust fans in 1946. The tunnel’s clearance was altered several times to account for the evolving train cars. Plans continue to this day to enlarge the tunnel in order to accommodate “double stack” train cars.

On February 12, 2020, the tunnel suffered a partial collapse. Crews diverted trains to other lines while the structure underwent repairs. The tunnel was able to reopen on April 4, 2020. To this day, the Hoosac Tunnel continues serving as a Pan Am Southern freight line, operated by Springfield Terminal Railway; seeing around eight trains per day.

Authorities urge sightseers and thrill seekers to avoid the tunnel, despite its historic and macabre allure. Passing trains and falling debris have injured many a visitor to the historic landmark. Tours and professional guides are available for those determined to get a closer look. The Heritage State Park Museum in North Adams is also a valuable source of information on the tunnel.

Whispers of paranormal activity began early in the Hoosac Tunnel’s inception. Workers claimed to hear moaning and disembodied voices from deep within the tunnel. Some have even witnessed the apparitions of miners passing through the tunnel.

One story tells of three miners who were in the process of setting charges in the tunnel. Before Ned Brinkman and Billy Nash could clear the area, Ringo Kelley set off the charges prematurely, crushing them under the falling rock. Some claim it was by accident. Others believe Kelley intentionally ignited the explosives to murder his associates. Either way, Kelley disappeared immediately following the incident. He reappeared one year later, strangled to death in the exact spot in the mine where Brinkman and Nash lost their lives.

Rumors immediately spread that it was Brinkman and Nash, returned from the grave, that got their revenge on Kelley. There’s just one problem with the story: there’s not a single shred of documentation to prove any of it ever happened. Furthermore, there is no record of men with those names having worked – or died – in the tunnel. This story seems to be nothing more than a campfire story passed on by the locals.

In 1872, two more men entered the shaft to investigate ghostly claims. Dr. Clifford Owens and drilling superintendent James McKinstrey entered the site after 11:30PM and proceeded to walk for about two miles. Owens reported the sight of a floating blue light in the tunnel, followed by the sound of “mournful” cries. He claimed that, as the light drew closer, it manifested into the shape of a man, less his head, carrying a lantern in his outstretched hand. The figure approached the men, stopping just in front of them for a short while before continuing down the shaft.

Luckily for one man, Joseph Impoco, the spirits are not always hostile. Impoco told a reporter for The Berkshire Sampler that he was chipping ice from the tracks one day when a voice called out to him to “Run, Joe! Run!” He turned just in time to see a train barreling toward him. Joe was able to jump clear of the locomotive, but could not find the source of the warning. He also recounted a time when he was using a crow bar to free a freight car stuck on the icy tracks. Suddenly, the same voice shouted at him, “Drop it, Joe!” He dropped the iron bar immediately, just as it struck a short-circuited power line that hurled it across the tunnel.