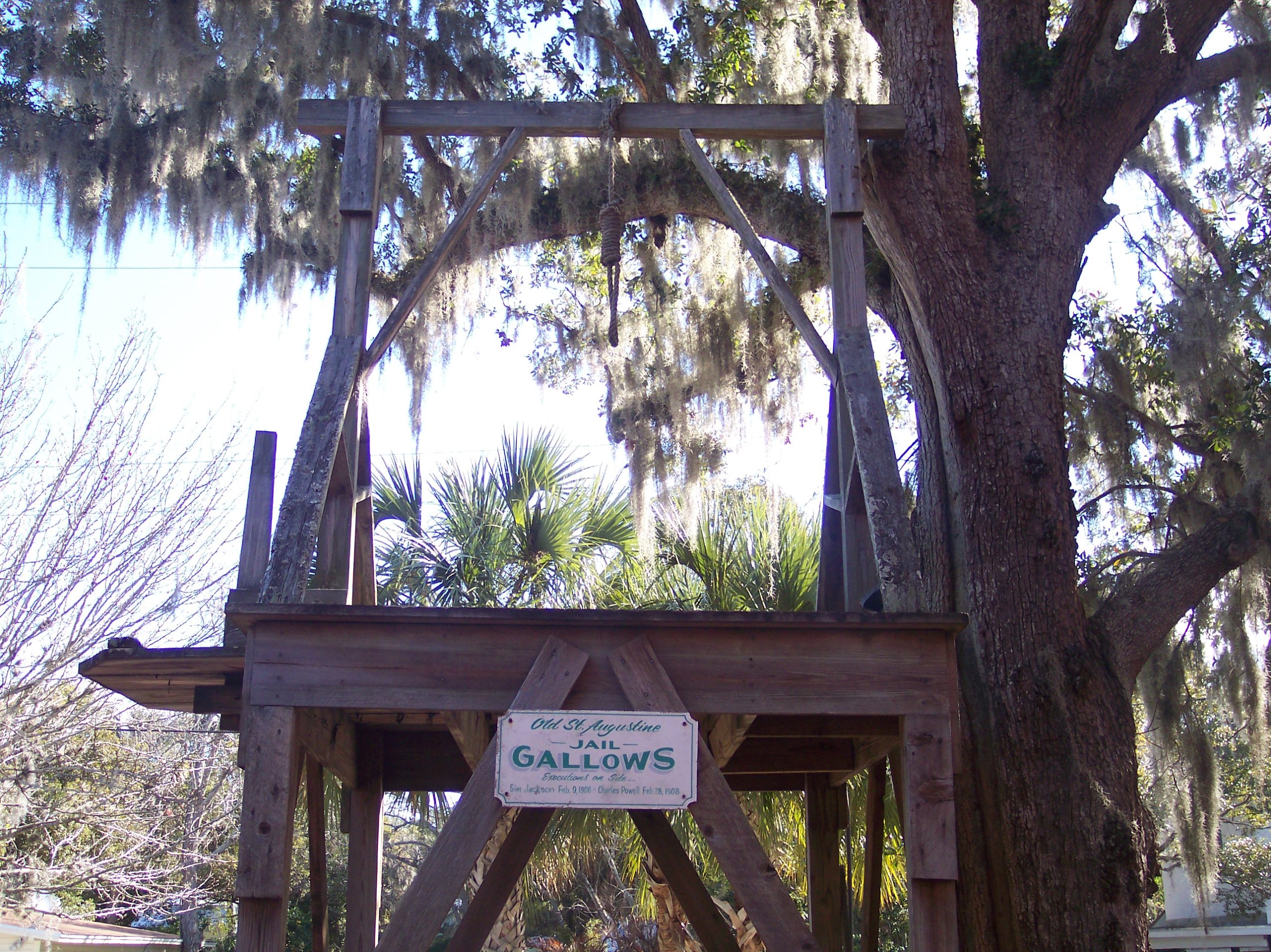 St. Augustine has perhaps the bloodiest history of any city in North America. What else would you expect from America’s first city? Now, the city is a tourist mecca, drawing visitors from around the world. One of its greatest attractions once struck fear into the hearts of men and women, alike: The Old St. Augustine Jail. The jailhouse would serve the city for only 35 years, but they were bloody, cruel, and influential years. The Old Jail is now a museum that showcases life ‘on the inside’, as well as a magnet for paranormal enthusiasts.

The ‘Old Jail’ served all of St. John’s County from its construction in 1918, to its closing in 1953. As the story goes, the city’s previous jail once sat in full view of the site where Henry Flagler planned to build his glorious Ponce de Leon Hotel. Flagler felt the prison was an eyesore and did not want his guests exposed to St. Augustine’s criminal population while visiting his beautiful city. Flagler offered to build a new facility at his own expense if it could be built away from the greater population. The county agreed and Flagler donated $10,000 toward the project. The Pauly Jail Building Company handled the design and construction, and the St. Augustine Jail was born.

The jail was constructed in the popular Romanesque Revival style, so that it would blend in with the residential homes around it. Aside from the bars on the windows, it would look like just any other house on the block to passersby. The inside, however, was a different story. The facility was designed for up to 72 prisoners; complete with a men’s section, a women’s section, a maximum-security area overlooking the gallows, kitchens on the lower level, and comfortable living quarters for the Sheriff and his family on the second floor.

Life ‘On The Inside’

The conditions inside the jail were notoriously horrid. No plumbing or sanitation was available within the cells, making bathing and basic hygiene a rare luxury. Linens were not allowed, and bedding was nothing more than a thin mattress stuffed with Spanish Moss, which attracted rodents and insects. Infestations and disease were rampant within the prison walls, only contributing to the death toll.

During the day, men performed back-breaking work on the chain-gangs. Breakfast consisted of hard tack and coffee before a long day of grueling work in the hot sun. The shackles would tear into the flesh of their ankles when they moved. Some of the men wore no shoes, only adding to the open sores they would sustain. Doctors didn’t visit the jail, unless it was for an execution, so infections were left to fester and often turn deadly.

Female inmates cooked and cleaned throughout the day and late into the night. Many were guilty of nothing more than promiscuity or lacking a husband. Inmates serving time for minor crimes worked the gardens or performed maintenance around the building.

Sheriff Charles Joseph “CJ” Perry was first to take control of the new prison, ruling over the inmates with an iron fist. Perry was an imposing man, standing at 6′ 6″ and over 300lbs. It is his legacy that lives on today in the reenactments and stories of the Old Jail Museum. The Old Jail Museum uses an animatronic “Sheriff Joe” to help educate tourists on the way life was when the jail was still in operation. The real Sheriff Perry, however, was not so kind.

He believed that those brought to the St. Augustine Jail must deserve to be there, and not a moment of it would be easy. He often made his rounds with a noose in hand, and kept dogs within the prison walls to deter the inmates from escaping. Sheriff Perry served St. John’s county for a total of 26 non-consecutive years, making him the county’s longest serving Sheriff to this day. He was a firearms expert, and often accompanied his deputies on even the most treacherous assignments.

Sheriff Perry died in office on February 7, 1919 due to illness. He left behind his wife, Lula Henrietta, and son Charles Franklin. Sheriff Elmer Ellsworth Boyce, a man well-respected by the community for his success in hunting down moonshiners, took up the helm. During his time in office, Sheriff Boyce lost three of his deputies in the line of duty. Boyce also died in office of a heart attack on November 27, 1942, leaving behind only his wife, Minnie Katherine.

In 1953, St. Augustine built a new, modernized detention center. However, despite the lack of modern amenities, the old jail was still in excellent condition. That’s when Henry L. McDanial, known to the locals as Slim, stepped up and purchased the structure. He kept maintained the building exactly as it had been as a prison and opened it to the public as a tourist attraction. This allowed guests a glimpse of what life was like ‘on the inside’. Slim McDaniel thrived as an early pioneer of tourism in St. Augustine.

McDaniel sold the museum to Melvin Bayer in 1986, who invested over $95,000 to expand the already thriving business. He added a restaurant and gift shop to the grounds; he also had it added to the The National Register of Historic Places in 1987. The museum underwent an extensive renovations again between 1992 and 1993 to restore the aging stucco and brick.

Historic Tours of America purchased the property in 1999 and continues to operate the property to this day. They offer historic tours to guests during the day and dive into the darker side of the prison at night on their ghost tours. Historic Tours of America not only operates a series of other attractions around St. Augustine, but they specialize in tourism around the country.

Hurricanes Matthew and Irma damaged the jail in 2016 and 2017, leading to extensive repair work on the external walls and roof, as well as the surrounding grounds. Even with construction going on around them, visitors continued passing through the halls of the jail both day and night. Many even believe either the storms or the work caused an uptick in paranormal activity.

Reports of paranormal activity are frequent at the St. Augustine Jail from staff and visitors, alike. Both the variety and the range of activity the jail presents is what makes it enticing to both professionals and enthusiasts. Phantom smells, physical contact, shadow figures, cold spots, floating lights, disembodied voices, and the other audio phenomena have all been reported from the property; not just within the walls of the jail, but also the surrounding area. Guests invited to sit in Solitary Confinement have reported seeing a human-like shadow crouched on all fours crawling toward them in the dark. Others have been scratched or grabbed roughly enough to leave bruises. Solitary Confinement is said to have the most activity.

The occasional smell of sewage has been experienced throughout the building, despite the efforts of the employees to track the source or to scrub it away. On the contrary, the scent of cooking molasses is often detected near the kitchen. Disembodied voices are heard whispering, moaning, shouting, crying, and sometimes laughing maniacally from the inmate cells, particularly from the maximum security area.

Some have heard Sheriff CJ Perry making his rounds. They report the sounds of heavy boots pacing the halls along the cells, as well as the sounds of his diligent dogs barking at the prisoners.

You can hear her for yourself, check out this audio captured by the ParaAtlas team!

“This EVP was captured on a Sony digital recorder in February 2009 in the Sheriff’s living quarters on the second floor. At the time, I was in the room by myself and another investigator, Matt, was in the hallway. While I was asking questions, Matt entered the room and stood just inside the doorway. After I introduced him, we captured what sounded like a child’s voice. At this time, we were the only two people in the entire building.” – Jean